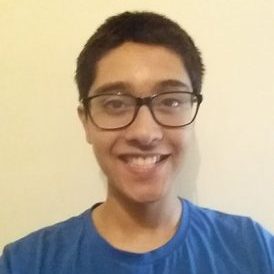 "I don't go a single day without thinking the phrase, I may have had Cancer, but Cancer never had me."

This chiasmus is a representation of my hardships and victories during my battle. During my treatment, I was upset that I would have to stay home for a few months, missing school and my friends. I felt that a part of my life had been stolen from me. But, in hindsight, I feel that this period benefited me more than it has adversely affected me and helped me understand my interests. This journey introduced me to two of my current passions, science and programming.

While I was in treatment, a teacher was assigned to teach me at home for a few months.

One of the subjects that I had was biology. At first, I was not that excited, but when my teacher showed up at my door holding a white binocular microscope, I was in awe. I made sure to explore the microscope as much as I could, looking at the letter ‘e’ in a newspaper to the cells of a fly’s wing in the blink of an eye. I used stains to create slides in order to look at the green, moving chloroplasts of plants and the nuclei of insects. I even looked at my own cancer cells! I flew through my textbook, reading about Mendel’s pea experiments, Darwin’s theory of evolution, and Watson and Crick’s discovery of DNA structure. I had found an absorbing way to occupy myself during my solitude. I have continued to sustain this interest throughout my high school years especially through the NJ science league, where I competed in different areas such as biology and chemistry.

During my forced stay at home, another passion formed. My uncle gave me a Lego robotics kit for Christmas, which involved building together and programming robots. At first, my inventions consisted of a humanoid robot that could check out obstacles around it, and a crocodile that could spit plastic balls at my grandparents while they were trying to watch TV. But my creativity was not limited by childish motives. I created a robotic stirrer to mix various capsules (to study the dissolution rate) for my science fair project. I created a robotic fish feeder to feed my fish when I was away from home. Eventually, I realized that programming my robots using the drag and drop Lego block coding wouldn’t meet the functionality that I required. In order to program more efficiently, I had to learn a programming language.

I continued to pursue these interests when I went back to school. At first, my explorations were limited to YouTube introductory videos on programming . However, as I progressed, I began to learn from other sources as well. I took an online course at a university and earned a certificate of completion for an introductory course in Java. With this achievement, I was able to participate in the American Computer Science League competition. In both my freshman and sophomore years, I was in the top five in my division, and able to compete in the international competition.

Another passion that I’ve fostered over the years is piano. Though I initially disliked practicing and playing, I’ve come to love playing all types of music, especially classical. Playing piano has helped me get through the difficult times that I have faced. I’ve performed at bi-annual recitals at the Monmouth Conservatory of Music for seven years, in addition to recitals at public venues and even at Rider University. Playing Piano is a skill that I am looking forward to pursuing while at college.

Through the microscope of a college education, I am looking to magnify and study my interests even as I create new ones. I am a good candidate for this scholarship because I am fully committed to succeeding not only for myself, but for my family, who motivated and inspired me to succeed, especially during rough times. I know that I will be able to push myself and be driven and motivated to achieve the very best. I am positive that the Beyond the Cure Ambassador Scholarship, through its financial support, will enable me to chase after my goals, and I believe that my hard work, drive to learn, and creative thinking will lead me towards a successful and accomplished education and career.