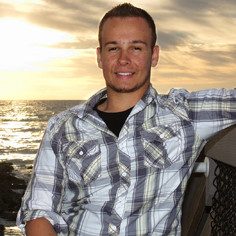 "It is much more freeing to put the disease out in the open instead or trying to forget it."

In 1998, 1,300 children in the United States were diagnosed with Acute Lymphoblastic Leukemia. I was one of those children. A cancer diagnosis typically results in a profound life change. For me, the change came just after my fourth birthday when I was diagnosed with leukemia. Four months into treatment my life took another dramatic turn. One day in July, my parents noticed I had difficulty walking. They immediately took me to the ER. Four days later I was almost fully paralyzed. My body had suffered an extremely rare reaction to one of the chemotherapy drugs. This unfortunate event nearly took my life and placed a heavy emotional toll on my parents. After years of therapy, I was able to regain much of my upper body strength, but I remain permanently paralyzed from the waist down.

Becoming paralyzed has been the biggest obstacle I have ever had to overcome. However, as the great Winston Churchill once said, “‘The pessimist sees difficulty in every opportunity, but the optimist sees opportunity in every difficulty.” Every day I live my life as an optimist, recognizing that I have been given a great opportunity to do extraordinary things in my life and to help others.

Since age seven I have been very active in sports like wheelchair basketball and handcycling. In 2007, our team took first place in the JV National Championships. That was a very memorable year in my basketball career. Our team had been working incredibly hard throughout the whole year to get to the championships. Our record going into the championship game was 24 wins and no losses. We were all eager to make it a perfect season. Halfway through the game, the other team had a player on the court who seemed like he could not be stopped. During a timeout, our coach asked me if I could defend this player. I knew that he was bigger and stronger than me, but I was not going to let that stop me from trying. For the rest of the game I was constantly trying my hardest to stop him. Even though he would often beat me, I never stopped giving my all. We won that game and became the National Champions. This past year, I was made captain of the varsity team and we are again eager to make it a National Championship year.

My ultimate passion is handcycle racing. I started racing at age 12 by competing in the 2006 Air Force Marathon and Detroit Marathon. To date, I have competed in 17 marathons. In 2010, I won both the Air Force and Detroit marathons.

At the age of 16, I had never imagined winning a marathon. That year I had spent close to 25 hours a week training and preparing myself for the Detroit Free Press marathon. My mentor, Glen Ashlock, was going to be at the race. I had first met Glen at the age of 12, he was one of the best handcyclists in the state. He took an interest in me right away and helped me with training advice. My goal was always to beat him in a race. The day I won the marathon was one of the best days of my life. It was such an amazing feeling to know that all my hard work had paid off. Glen came up to me after the race and said, ”besides your parents, there is no one prouder of you than I am.”

Just like in life, I put everything I have into racing and training. Determination and dedication are key aspects of my mentality. My future goals include completing an Ironman and qualifying for the United States handcycling team in the 2016 Paralympic games. With determination and hard work, I believe nothing can stop me from achieving my goals.

The circumstances of my life have allowed me to do some truly amazing things and meet some inspirational people. Since 2008, I have actively been involved with the Disability Network of Michigan. Participating in four Great Lake Independence Rides and raising over $7,500 for the Disability Network of Michigan, I have made a positive impact on the disabled community. Through the network, I have also been given the opportunity to meet and speak with many individuals who are newly injured. Often these individuals have a tough time adapting to the new lifestyle of being disabled. Being in a wheelchair, I can connect with them better than any other person and show them that there are many opportunities to live life to the fullest.

Having a disability has made me a stronger and more compassionate person. Increasing disability awareness is very important to me. A person should never be afraid to pursue what they truly desire in life, no matter how great the obstacles may seem.

My dream is to get a Bachelor’s degree in mechanical engineering and then pursue my Juris Doctor in law. In school I work to my utmost ability to succeed and know that a good education and a positive attitude are the most valuable thing a person can possess in life. Throughout my high school education I have taken six advanced placement classes and have maintained a 3.51 GPA.

Every day I look forward to the challenges and opportunities life presents. I realize there is no point in looking back at the past and wondering what life would be like if this had not happened. Every day I appreciate the life that I have. Paralympic rugby player Dean Maccabe said it best, “I don’t think about what happened to me, I only concentrate on what I can make happen.”