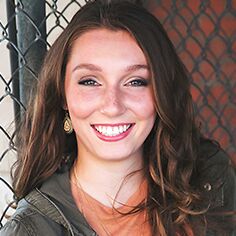 "This is the calling of survivorship. It is embracing your experience to inspire others to keep fighting."

Who would’ve thought that wearing shorts in public would be one of the most important decisions in a teenager’s life? I often catch the drifting eyes of strangers move toward my thigh, reminding me that I look different; but different is not always bad. The 11-inch battle scar and scoop out of my leg are just different enough for people to ask the question: What’s your story?

On March 21, 2013, I was called down to the main office in my middle school. I found my parents frozen in place and with puffy red eyes that told me everything I needed to know without a single word. In the next two weeks, I would learn that my body had betrayed me, that the only solution would be an intensive 5-month treatment consisting of chemotherapy, radiation, and a massive surgery that would remove a fist-sized synovial cell sarcoma.

Rolling down the halls of the outpatient oncology and hematology ward in the Colorado Children’s Hospital, I looked around and saw that I was not alone. I saw the many faces of childhood cancer, my own being the newest addition. Almost every child was bald and as skinny as a stick. Although they were the heart-wrenching images of the children you see in those St. Jude commercials, they were also the epitome of hope, of the belief that people can overcome undue suffering through the power of medicine. I realized something during the few moments within that ward: I knew I would come out of my treatments alive.

The effects of this revelation, however, were not quite as immediate. I was missing one key medication: positivity. Once a muted part of my life, positivity became something I had to look for. It was initially difficult to find amidst the pain and nausea, but over time something clicked. I realized that while I was sick, I was alive. Through my treatments, I developed a new perspective of my world, one that allowed me to savor every meal, thankful that I have an appetite. I learned to enjoy every breath, to share my opinions, to take risks and put effort into everything I do. This expansion of positivity has given me confidence and appreciation that I have never had before, and these incredible feelings are ones I want to instill in others going through difficult times. Being a survivor has revealed to me the importance of discussion and community in the lives of those struggling. Because of this, I have made it an important part of my life to reach out and support the community while encouraging others to do the same.

I decided to inspire through example by being actively involved in leadership and service.

I have branched my message of survivorship to people across the world through leadership programs at both the local and international level, as I was nominated as an ambassador for a People-to-People medical leadership summit at Johns Hopkins University. In my hometown, I spent every summer after my diagnosis volunteering in the hospital, where I utilized my story to bring hope to patients receiving treatment in the infusion center and inpatient pediatrics center. While I arrived as a volunteer believing that I would be the one supporting others, I left as a human touched by the incredible messages of love from those survivors. That is the amazing thing about the cancer community-given a voice and attention, survivors will shape perspectives and lives with their experiences, with their support, and with their love.

Through my experiences as a survivor and volunteer, I have grown a desire to give back to the cancer community and to the medical professionals who dedicate so much to their patients. I hope to return the favor by pursuing a career in medical research, which will hopefully provide millions of others with the gift of survivorship.

To leave a legacy that allows others to continue their own is the best legacy one can leave. This is the calling of survivorship. It is embracing your experience to inspire others to keep fighting. It is becoming a person of strength and initiative who will spread positivity, love, and awareness; and of course, it is wearing your shorts in public, knowing that you are a success story and a beacon of hope for the future.