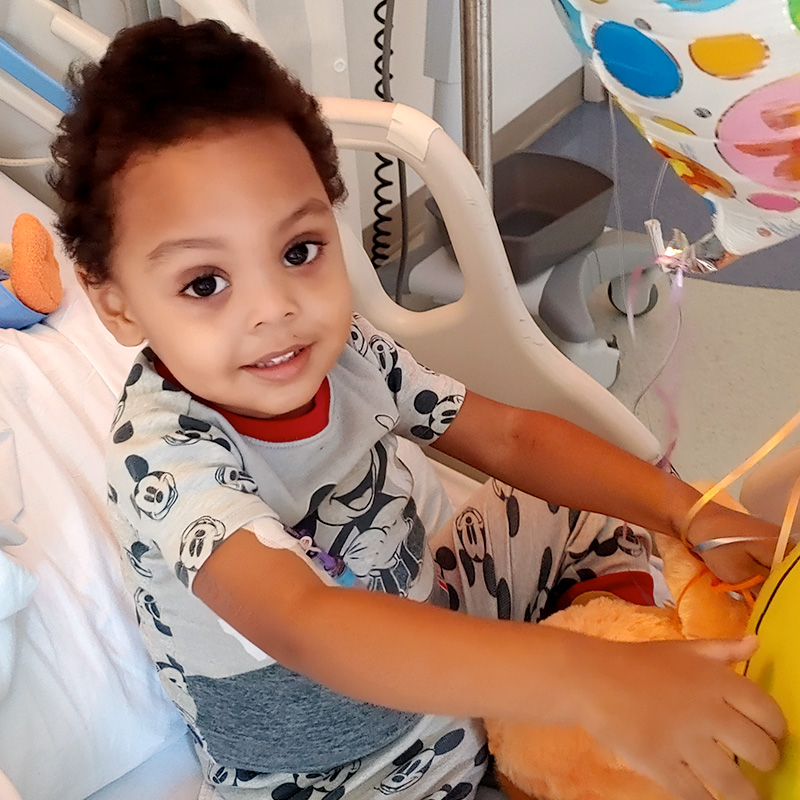 “The National Children’s Cancer Society helped me out a lot. It was such a big help, considering we were trying to get back to our lives,” said King’s mom, Nasharis.

On what was thought to be a normal Monday in January of 2021 for 2 year-old King and his family turned out to be a day they would never forget. Because of a possible COVID-19 exposure, King’s mother, Nasharis, received a call from her son’s daycare saying they would be closed for the time being. King had not been feeling well that week and had already gone through a round of antibiotics with no improvement, so she decided to make a same-day appointment with their pediatrician for answers. In addition to the stress of not knowing what was making her son sick, she felt the even more overwhelmed trying to wrangle two toddlers in the hospital during COVID-19 protocols since the daycare was closed. King’s doctor took some blood samples and less than 24 hours later, Nasharis got a call she never thought she would get.

Nasharis was told that King’s white and red blood cell counts were dangerously low. The doctor said there was a possibility that King had leukemia, but they could not be certain until further testing was done. Her heart sank, and she had no idea what to think. She called her sons’ father and her mother, hoping someone could watch King’s little brother, who was only 10 months-old. She wanted to be completely present as she had to rush King to Boston Children’s Hospital, over an hour away from their home. Fearing of what the outcome could mean for her son and their family, she needed answers.

The best way doctors could make an official diagnosis for King was for him to endure multiple lumbar punctures that spanned over the course of two weeks. There is nothing easy about seeing a child in the hospital, and every lumbar puncture King needed meant he needed to be put to sleep first. The risks overwhelmed Nasharis, and while each time “scared her to death,” she remained faithful that this painful experience would lead to some answers.

When the results were back, the doctor came in to break the life-shattering news: “I’m sorry, your son has leukemia.” The amount of heartbreak and fear that King’s mother felt was unbearable. “My world crashed. I stopped breathing. I was in complete shock.”

King was diagnosed with Acute Lymphoblastic Leukemia (ALL) – the most common and curable form of childhood cancer. Nasharis was able to breathe for the first time in weeks because she had gotten the answers she needed and knew with the right treatment, her son would be okay. Once King had an official diagnosis, his oncology team was able to implement a treatment plan for him.

He began treatment immediately and Nasharis had to adopt a new “normal” for her family. King spent four grueling days in the intensive care unit before his doctors felt comfortable enough moving him to the oncology floor. He remained inpatient for 45 days – almost two months away from his home and little brother. His mother was thrilled when they were released and could go finally back home. Unfortunately, in order for him to continue treatment, Nasharis and King would need to travel three to four times every week back to the hospital, which was a two hour drive roundtrip.

From the beginning, King’s family was assigned a hospital social worker to provide resources that they may find helpful. The NCCS received their application for assistance and shortly after, Nasharis received help through our Emergency Assistance Fund to help cover any household expenses that accrued while they were away. They also received support through our Transportation Assistance Fund so that King never missed an appointment. Their NCCS case manager also provided compassionate emotional support that Nasharis needed after learning about King’s diagnosis. Both Nasharis and King received free publications from our organization: The Other Side of the Mountain: A Parent’s Guide to Surviving Childhood Cancer and Sammy’s New Mask, a coloring book for friends of children with cancer. Nasharis said, “It was definitely a huge relief to receive some financial support. The National Children’s Cancer Society really helped me stress less so I could focus on my children. Thank you!”

King received amazing care from a dedicated team. Almost two years later, King is still being seen twice a week, but his treatment is going according to plan. While he struggles with fatigue, he is still able to play with is little brother. “I couldn’t be more proud of him for being so brave throughout his hospital stay,” Nasharis shared.

If you would like to help King and other children battling cancer, donate today!
View other stories similar to this one