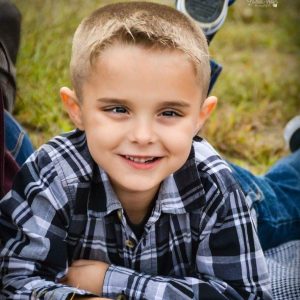 "The National Children’s Cancer Society has been there with us from the beginning" - Colton's mom.

Colton’s symptoms appeared virtually out of nowhere. Instead of spending the weekend playing with his twin brother, Jaiden, he was plagued with persistent headaches. Then, on the following day at school, he suddenly lost the ability to move the left side of his body. Terrified, his parents rushed him to the emergency room. Colton’s test results revealed a very aggressive brain tumor, known as Diffuse Intrinsic Pontine Glioma (DIPG). Doctors informed his frightened parents that the tumor was inoperable, but would do anything and everything possible to save his life. He began radiation to shrink the tumor, but there are still no real treatment options for Colton’s form of cancer.

Colton’s family heard about a clinical trial for DIGP and made monthly trips from their Kentucky home to Cincinnati. The frequent trips were over 300 miles away and became very costly, very quickly. His parents reached out to the NCCS for traveling assistance, as well as emotional support – Colton’s parents took some comfort in working directly with the same case manager. They also gleaned good information from our parent guide. His mother, Shannon says, “…The National Children’s Cancer Society has been there with us from the beginning. We are very thankful for the support they have given us!” At six years-old, Colton is still battling his tumor, but he remains happy-go-lucky and continues to love life, school and playing with his brother.

If you would like to help Colton and other children battling cancer, donate today!
View other stories similar to this one