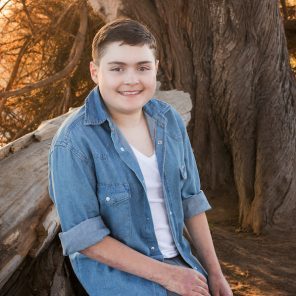 “We are thankful that The National Children's Cancer Society has helped us through a very challenging time in our lives. That extra support has really meant the world to us,” Nick's mom.

Just before Nick’s 12th birthday, he fell gravely ill with the flu and pneumonia, causing him to be hospitalized for three months. Nick and his mother, Kim, had no idea that shortly after recovering, Nick’s blood work would reveal something alarming. His doctors were in disbelief as they broke the news to Nick and Kim – he was battling a very rare form of leukemia known as “myelodysplastic syndrome.”

Kim described Nick’s treatment plan as a “roller coaster full of ups and downs.” He endured four grueling years of chemotherapy, photopheresis, various drugs and steroids, a bone marrow transplant, and eventually surgery. When one medicine stopped working, doctors scrambled to find another one that would. This meant countless delays in Nick’s treatment plan and a slew of new side effects with each drug. Over the course of his treatment, he had both hips and his knee replaced from the damage it caused.

When Kim first learned that Nick’s aggressive treatment plan required him to be seen twice every week at a hospital over four hours away from their home, she panicked. Seeing her child struggle to stay alive was hard enough – she didn’t know how she could handle worrying about paying her bills as well. “As a mom that watches her child struggle in such a dark and painful way, it would be mentally impossible to not be able to afford a home and food on the table as well,” said Kim. Nick’s hospital social worker referred them to the NCCS where his case manager provided practical and emotional support to Kim, as well as mileage and lodging assistance so they could make every appointment. “We are thankful that The National Children’s Cancer Society has helped us through a very challenging time in our lives. That extra support has really meant the world to us,” Kim shared.

If you would like to help Nick and other children battling cancer, donate today!
View other stories similar to this one