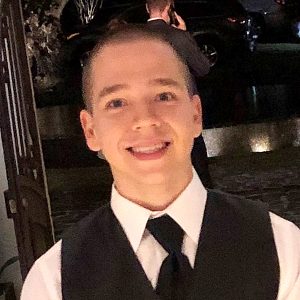 Survivorship means never forgetting, forever being grateful, and giving back to those in need.

What does survivorship mean to you?

Toxic slime. Teenage Mutant Ninja Turtles’ toxic slime. My mom tried to explain to me at the age of four that chemotherapy was toxic slime and that it was going to eradicate my cancer, while hopefully leaving my frail body as unscathed as possible. Cancer, chemotherapy, surgery, and radiation became my reality for the year in 2005.

On April 14, 2005, at the age of four, I was diagnosed with stage four, inoperable Neuroblastoma (a cancer of the nervous system.) My prognosis was a 50/50 chance of survival if I could endure the extensive, vitriolic treatment plan that lie ahead. Never would I have imagined how 2005 and its brutal events would change my future and reshape my outlook on life forever.

During my treatment at Arnold Palmer Hospital for Children, for months on end, I began to experience the harsh reality of childhood cancer. My body was ravaged by chemotherapy, causing me to lose half of my body weight in the first two months.

Vomiting became a daily, sometimes hourly event that I grew accustomed to quickly. My body became a war-zone, covered in scars, permanent reminders of the eleven surgical procedures that I underwent in an attempt to save what was left of my life. I was isolated from the world for twenty-eight days while undergoing a stem cell transplant.  Through all of this, I waited, hoped that my body would respond and not revolt against the procedure so that shortly I could be declared cancer free.

Looking ahead a year, a torturous year, I achieved the long-awaited status of being declared cancer free and labeled a survivor! From the moment those words rang in my ears I knew I had to make a difference and help others just like me who were fighting for their lives. As a result of my treatment and my desire to give back, I founded and serve as CEO of my own 501 3c non profit charity, Toys From Tyler Inc. I have traveled to Haiti to volunteer at an orphanage, and make yearly trips to the hospital which once created my imprisonment to spread hope through helping others.

Survivorship means never forgetting, forever being grateful, and giving back to those in need.

As graduation from high school nears I plan to attend college in the fall to study neuroscience. My future career goal is to be a neurosurgeon specializing in brain tumors, the same brain tumors that have taken the lives of my friends. Without surviving childhood cancer my future plans could never be as arduous and passionate as they are now. I survived cancer, my next challenge is undergraduate studies and medical school. Not only do I want to be known as a cancer survivor, I want to one day be known as Dr. Tyler Youtz.